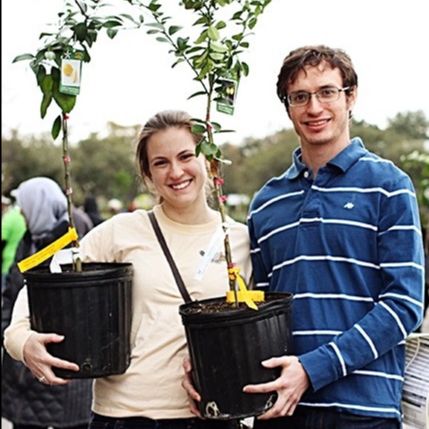 The Urban Harvest Fruit Tree Sale is one of those amazing human events. For the last two decades, hundreds of people from all over have come to buy great fruit plants.  They invest in a satisfying, delicious, and productive future while more than 100 volunteers help them choose from thousands of fruit trees.

It’s too bad then that there won’t be a sale this year.  Having a health promoting mass sales event during a pandemic would defeat one of the sale’s core purposes, and because of the reliance on volunteers, would probably be impossible.  So, this year we will all need to miss what might be one of the largest one-day fruit tree sales on the planet.

It all started with Leon T. Atlas, MD.  Dr. Atlas—Leon—grew up in Houston, went to Rice, and then went on to become a highly respected infectious disease specialist.  He isolated the first cold virus and was innovative enough to make the cover of a national magazine.  When he moved back to Houston perhaps about 1957 to continue his virus research and establish a primary care practice, he also brought his fascination with rare and gourmet quality fruits to our region.  In his spare time, he began to test varieties of fruits for their qualities—climate adaptation, productivity, reliability, pests, taste, proper rootstocks, and more.  He became part of a growing network across the south of fruit explorers: farmers, nursery operators, agricultural extension agents, backyard hobbyists, and university researchers.  They banded together to test varieties, and gradually found many wonderful fruits of many kinds.  I for example was part of a rare citrus network in the 1980s called jokingly the citruholics.  We owe a tremendous debt to this legacy.

Leon began to educate people about his findings.  And this led to a very popular yearly Houston Arboretum series of seven consecutive Friday night classes on fruits.  Over 25 years, he taught this to hundreds of people including myself, Urban Harvest Co-founder and first staff George McAfee, Jr., and many of the people who have carried on Leon’s legacy both during and after Leon’s passing.  Leon provided a hand-written yearly guide to fruit recommendations together with status reports on test results, and using his own funds and own back patio, distributed rare fruit plants to his many students for testing.

Leon was also a co-founder of Streetfarmers’ Co-op—the first organic healthy food store in Houston.  He was the Co-op’s cheese buyer, and that’s where I met him first in 1980.  By 1983, his backyard fruit distribution efforts were so popular that we moved it to Streetfarmers’ and it became a sale.  That increased the interest beyond his students and proved very popular.  One of his students—the late Bill Rohde—had taken Leon’s classes 3 times.  He also partnered with Heidi Scheesley to start the then young nursery operation of TreeSearch Farms.  TreeSearch was much better able to run the sale and care for the plants, so by the mid-eighties the sale became a very popular one-day retail event there.  See Heidi’s excellent explanation of this effort at the 3 minute mark of the TreeSearch history video.

After Heidi and Bill decided to take TreeSearch wholesale and focus on their growing native and adapted plant business, they eventually moved the annual retail sale to regional Master Gardeners and regional retail nurseries sales in various surrounding counties. These sales again proved very popular and they kept expanding as the general public slowly realized the quality and the bountiful possibilities.

We founded Urban Harvest in 1994, had only a small staff and office space and was focused mainly on community and school gardens in the early years.  By the turn of the century, that changed, as did and our relation to fruit sales.

Stay tuned for part TWO - The Chronicles of The Fruit Tree Sale By Bob Randall, Ph.D.

Thanks, for Helping us Grow!